With April and May in the books we are pulling the data to prepare you for the coming weeks. This data set will be particularly important going forward as it is the last look at pre-Horizons Modern. We will comb over the expansive data set to establish the leading archetypes as well as the best performing mainboard and sideboard cards in the Modern format. It is especially interesting to compare this data side-by-side with last month’s data. Let’s dig in.

Methodology
All data has been pulled from mtgtop8.com. The data set contains 1,159 decklists from  April and May 2019 tournament results. Archetypes that comprised more than 5% of the dataset have been identified above. Individual cards have been ranked by dominance rating. This is calculated by multiplying the percent of decks they appear in by the average number of copies that appear in said decks. For frame of reference, a card that appears in 25% of decks as a two of will have a 0.5 dominance rating. For a hypothetical, 100-player tourney this means that there would be 0.5 copies of said card per player in the room.

Top Archetypes
Phoenix continues to soar above the rest of the format but it has lost a few percentage points. The deck is still great and dominates the highest level formats but is slipping. UWx Control is still the runner-up but has picked up ground and barely trails Phoenix at this point. Straight Azorious makes up the vast majority and would have made second without help but Esper and Jeskai do pop up from time to time. Humans continues to surge as well climbing past GBx and Tron. Tron actually gained metagame share just not at the rate that Humans has. GBx, on the other hand, trended down significantly with a near -25% change from period to period. Dredge saw a small upwards trend after barely making the cutoff last month. Affinity has fallen behind it and would not have made the cut if we had not combined Experimental and Hardened builds. We have lost Death’s Shadow as it fell to 4% followed closely by Amulet Titan at 3%. While these were the best performing archetypes for the period, there is nothing wrong with belonging to the great wide other. 45.5% of the succeeding decklists are unrecognized archetypes after all. 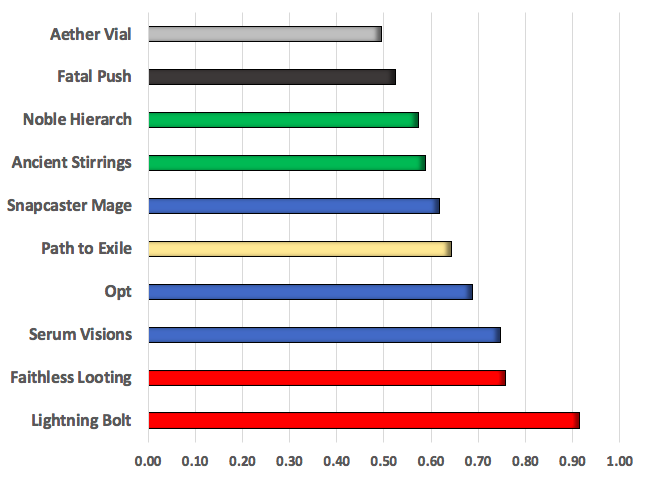 Of course all of these metagame shifts are evident in the format staple data as well. The Top 4 have held steady with Lightning Bolt still being busted. Though it has slipped, normally we see Modern tournaments feature more Lightning Bolts than players but not this month. It was a great month for Path to Exile as it has leapt into the Top 5 carried by UWx Control. Snapcaster did the same moving from #10 to #6. What is clearer to see toward the bottom is the ascension of Humans and the slow landing of Phoenix. Manamorphose has been pushed out of the list and we now Noble Hierarch and Aether Vial creeping in. Outside of those trends it is business as usual. Stirrings gonna stir, Lootings gonna loot.

As is typical, there is much more movement among sideboard choices; they are much more customizable. Surgical lost a bit of ground as folks realized how overrated it has become. Meanwhile, Damping Sphere surged to take the top spot. Nature’s Claim and RiP held constant spots from period to period. The other cards, apart from Dispel, have not actually gained much dominance rating but their competitors have fallen. Anger of the Gods and Blood Moon have fallen out with Ceremonious Rejection and Dismember coming up the rear to stake their claim. I do have to note that this was a good time to be playing Path in the sideboard as well. It was beat out by Rejection by 0.001 dominance rating. So note that when looking at the mainboard rating as well; the card is amazing.

Wrap-Up
I always enjoy comparing the results data from the previous month to the current. This will be the final data period that lacks the impact of Modern Horizons. Which archetypes do you expect to benefit? Will any of the new cards managed to fight into the Top 10s despite the two-month data period? We would love to talk it over in our discussion group. Or if you would like to take a swing at writing content for the site you can contact us directly here. We will be back tomorrow with the best tech from Grand Prix Kansas City. Until then my friends.