Data, data, data. I always want more but right now I am not happy to see it. Hogvine has a stranglehold on the format and something has to give. This was the biggest weekend for Modern in quite some time. Today we will analyze and then combine the results of Barcelona’s Mythic Championship and Grand Prix along with the SCG Open in Columbus. This will give us a fat sample size of 52 decklists to sink our teeth into. Let’s not waste any time. 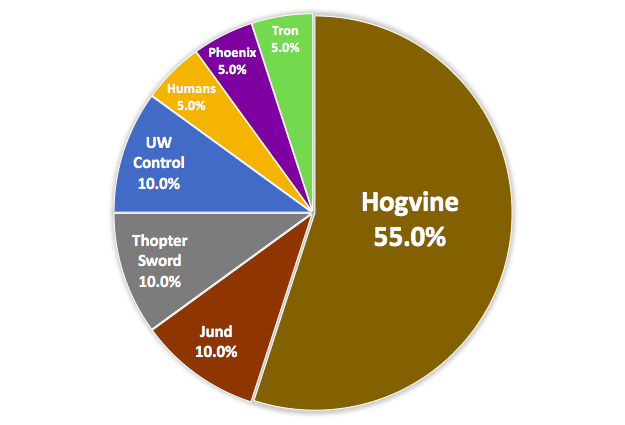 No need to go into detail here as it was thoroughly explained in yesterday’s article. This sample contains the twenty players that fought their way to an 8-2 record or better in the Modern portion of the Mythic Championship. I do not mind it contributing twenty decks to our final sample, compared to sixteen from the others, as it featured the highest level of competition on the weekend. 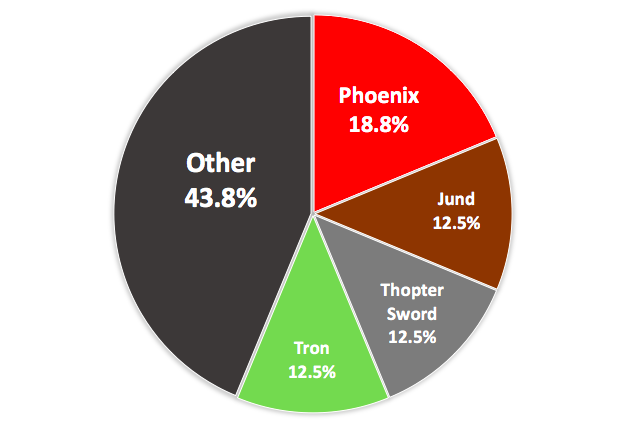 It was a tough call for me whether to include this one or not but full coverage is available here. Normally a Grand Prix provides high-quality competitive data. However, this one coincided in location and time with the Mythic Championship. Therefore, the majority of skilled players that would have competed were instead participating in the Mythic Championship. I do not mean to belittle the accomplishments of these players though. They may have not qualified for the MC but they competed in a large tournament and performed admirably. The results are not wildly different from the other tournaments in our sample with one glaring exception. Hogvine was a rogue deck among the Top 16 but I imagine that most Hogvine players were at the MC. One caveat to consider is that one of the Tron players was on Mono-Green while the other was on the Colorless Eldrazi build. Also one of the Phoenix players was on Mono-Red. We obviously have bigger fish to fry right now but I do want to point out that Phoenix has been the top archetype at every Grand Prix, eight straight I believe, since KCI was banned. 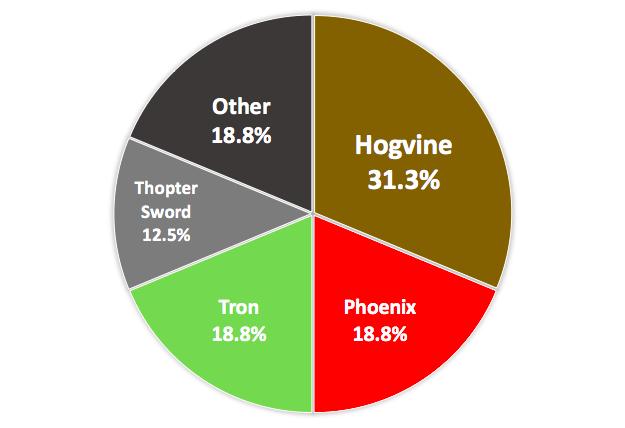 On the other side of the pond, Starcity Games rolled into Columbus. The ongoing MC would not have a significant impact on the players at this event and the results show it. Hogvine was almost as dominant here as it was at the MC. Beyond that we saw the usual suspects in Phoenix, Tron, and Thopter Sword. Similar, to the GP though we see Humans fall into the rogue category. Even more surprising is that Jund misses the Top 16 entirely. Similar caveats to the graph are present here as well. One of the Tron players opted for Eldrazi and a Phoenix player went with an innovative Gruul build for Wrenn and Six.

Putting it All Together

Finally we come to the final results. With the results of all three tournaments combined we see Hogvine outperform any two decks combined. If you take Phoenix, the former format king, out of the equation Hogvine beats out any three decks combined. The deck is busted and will be banned again. Thopter Sword, reborn from Modern Horizons, may just be the best deck in Modern once Hogvine goes. There is not a stock build but it has performed extremely well lately. Tron has not placed this well in quite some time and neither has Jund for that matter. These somewhat low results for Humans and UWx Control are surprising considering their recent performances. I do want to highlight that the x comes from an Esper Control build that made Top 8 at the GP. It will be interesting how this shifts after the next B&R.

Rogue Decks
With such a large sample sample size comes a fair amount of rogue decks. The Mythic Championship top performers came out to an even 20 players so every archetype comprised at least 5%. Most of our rogue decks actually came from the Grand Prix though none of them made Top 8. In the Top 16 we had Bogles, Burn, Hardened Scales, and Neobrand. This is the highest placement we have seen from Bogles in a while and I believe it to be quite underrated at the moment. Burn and Hardened Scales performed admirably despite underperforming at the MC. This was also the first real coming out party for Neobrand. It proves that the deck has legs but it is not the format crusher it was purported to be some time ago. The final two rogue decks come from the Open in the form of Counters Company and Breachshift. As time goes on Devoted Druid decks bounce around in Tier 2 with no clear direction on the best build or even what colors to use; this time it was Abzan and only missed Top 8 on breakers. Putting Through the Breach in Titanshift currently seems like a no-brainer. Hogvine is so fast and you really need to be able to say “Oops, I win”. They may not be the top performers right now but all of these archetypes can surely hang in there.

Wrap-Up
Things have been so data heavy recently that my eyes might just bleed. This should really wrap-up the results of Modern’s big weekend. I only wish that Hogvine was not corrupting our dataset. Oh well, in a month it will not be a problem anymore. What do you think they will ban this time? Is Looting finally getting a booting? Let us know your thoughts in our discussion group. Or if you would like to take a swing at writing content for the site you can contact us directly here. We will be back tomorrow with another article for you to enjoy. Until then my friends.