With September and October in the books we are pulling the data to prepare you for the coming weeks. This data set contains over 1,500 decklists and I am especially excited because it is 100% post-Looting Modern. We will comb over the expansive data set to establish the leading archetypes as well as the best performing mainboard and sideboard cards in the Modern format. Make sure to compare this data side-by-side with last month’s data to see how things have changed.

Methodology
All data has been pulled from mtgtop8.com. The data set contains more than 1,500 decklists from September and October 2019 tournament results. Archetypes that comprised more than 5% of the dataset have been identified above. Individual cards have been ranked by dominance rating. This is calculated by multiplying the percent of decks they appear in by the average number of copies that appear in said decks. For frame of reference, a card that appears in 25% of decks as a two of will have a 0.5 dominance rating. For a hypothetical, 100-player tourney this means that there would be 0.5 copies of said card per player in the room.

Archetypes
Finally we have a full-fledged dataset for the post-Looting Modern format. Overall, the change from last month is a rearrangement of the top decks. However, Burn is still on top. The format slowed down and the rise of canlands from both sides of the table have helped Burn players tremendously. At the moment it looks to be waning in Oko‘s wake and I am interested to see if it still comes out on top a month from now. We have recategorized Whir decks into Urza decks as there was really only one Whir deck. Now there are multiple similar strategies that fall under Urza’s rule. I believe these to be the best decks in the format but I am beating a dead horse at this point.

In the third spot, we see this month’s only new entrant: Death’s Shadow. Whether it be Grixis or Jund (or even Sultai) the former format king has returned. Traditional Jund’s percentage has waned a bit as the format has diversified but it is still the 4th most successful deck of the period. Eldrazi decks barely snuck in last month but they have continued to gain share. The vast majority of these were Eldrazi Tron builds. We have recategorized Stoneblade decks to narrow it down to UWx builds; Azorius, Bant, Esper, and Jeskai. This would have a small impact on the share but it helps to ensure data accuracy. It appears that, reclassified or not, Stoneblade’s metagame share is slipping. Then finally we have Tron. It has dipped very slightly from the previous month and I have a hunch that it will see a resurgence next month.

This month we had to do a Top 11 as Stirrings was 0.001 dominance rating behind 10th. With Faithless Looting gone, Bolt is the uncontested king of the Modern format. The average Modern tournament continues to feature more Lightning Bolts than actual players. Path is still hanging out at #2 despite many copies ending up in sideboards; not a component of the calculation here. The format has become more diverse with Looting gone so, despite Burn’s continued success, the Top 10 is not a red as it was last month. We are seeing artifact decks begin to creep up the rankings though. Opal and Astrolabe are hallmarks of the Urza decks but they are powerful enough to see play elsewhere. Stirrings has begun to sneak back up after a couple months off due to Tron’s continued success and the rebirth of Amulet Titan in Once Upon A Time‘s wake. Opt has also found its way back in, and Snapcaster has climbed, as blue decks are a bit better with Looting gone. The rest is business as usual with the best cards in the format. 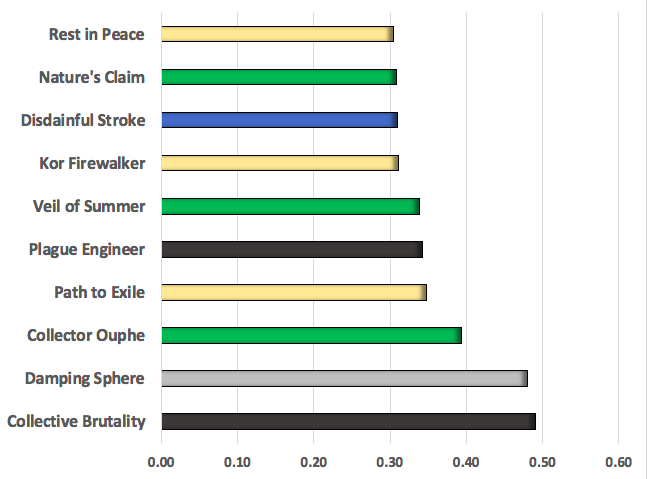 The sideboard adaptation is fully on display here. We saw that Burn was dominating last month and started gunning for it. This saw the rise of Collective Brutality and Kor Firewalker; though Brutality was doing great last month as well. Damping Sphere is soaring to take on the rising Amulet Titan; of course Tron and various combos are there to beat as well. Ouphe has also ascended to combat the myriad Urza decks. Veil of Summer has finally arrived and I will keep praising this card every chance I get. This is Modern’s best color-hate spell and it is not particularly close either. We also see Disdainful Stroke make our ranking for the first time this year and I am not entirely sure why. Of course it is solid against the ramp decks we have mentioned but what else? Eldrazi I suppose. Maybe very specific Urza builds. This could be a card to watch carefully. The finally we see Rest in Peace and Nature’s Claim falling off. There are fewer graveyard decks to RiP and fewer graveyard decks that protect themselves with Claim. It really is just that simple.

Wrap-Up
This was the dataset that I could not wait to see. A full two months, over 1,500 decklists, of post-Looting Modern. There are some concerns about Urza decks featuring Oko, but leading up to right now Modern has looked pretty swell. Sure Burn was a little annoying but you can see here that sideboards were being tailored to take it down. Do you think it can keep that top spot for a third month straight? If not, who do you expect to claim the throne? Please share your thoughts with us in our discussion group. Or if you would like to take a swing at writing content for the site you can contact us directly here. We will be back tomorrow with another article for you to enjoy. Until then my friends.